Ant Moorhouse presented to a full house at Byron Theatre on Thursday evening 26th September at the opening of the movie 2040. A great privilege to share the EarthTech story to a passionate community in Byron Bay.

Helping youth put their thoughts and ideas into actions and outcomes, is startup EarthTech, a company who is helping young people make the discoveries, create the technologies and build the companies needed to save the planet and our future.

EarthTech says their goal is to help the world meet the United Nations Sustainable Development Goals by 2030.

Queensland company EarthTech has launched a nationwide competition for under-30s to “unleash their creative and tech skills” to reverse the impacts of climate change. EarthTech co-founder Brian Keayes said winners would be sent on an all-expenses-paid trip to Makepeace Island, Richard Branson’s Noosa home, in February next year.

EarthTech is proud to co-present 2040 this Thursday night at Byron Theatre & Community Centre. We are pleased to invite you and your guests to the screening of 2040, the thought-provoking new film directed by Damon Gameau.

EarthTech Co-Founder Ant Moorhouse will share his experience on why he started EarthTech, trying to make sure his efforts were on the right side of history to help make our planet sustainable for all life. “I think we all need to act urgency. If we all get onboard, in our own way, I’m optimistic”. 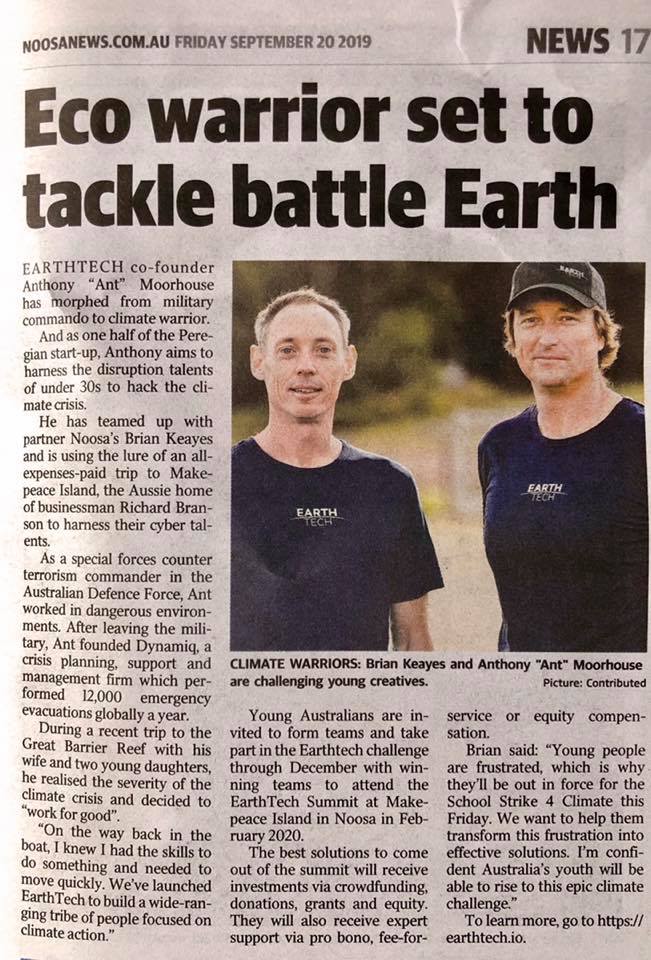 ‘Yes, we can save the planet’: a chat with Dr Hugh Possingham

Hugh Possingham is chief scientist at the global environmental organisation The Nature Conservancy. We asked him about climate change, technology and optimism.

Dr Hugh Possingham is one of Australia’s most eminent scholars, and currently leads global environmental organisation The Nature Conservancy as its scientist-in-chief. He’s also one Earth Tech’s expert advisors, giving us extraordinary access to one of the planet’s greatest thinkers in conservation, ecology, technology, and the interaction of all three.

Our founder Ant Moorhouse sat down with Hugh over a virtual cup of tea to talk about innovation, politics and why it’s smart to be optimistic about the future.

Watch the whole Q&A here, or read on for some highlights.

Q: At The Nature Conservancy you seem extremely pragmatic. What’s with that?

A: People will only [change their behaviour] if they realise it’s important to them, so we very much embrace the pragmatic ‘ecosystem services’ view of nature.

Pollination is falling to pieces all over the planet, and we need to deal with those things, and that’s a problem largely with pesticides and native vegetation. Fisheries are sustaining hundreds of millions of people in terms of protein, so we need to sort out not just big fisheries but also help smaller artisanal fisheries become more sustainable, from the Solomon Islands to Ecuador. So we see our outcomes as actions on the ground, in a bigger context.

Q: Are you an optimist or a pessimist about humanity, the world and where we’re heading?

A: I’m very much an optimist… I mean, I’ve been through some depressing fights, a lot of habitat has been destroyed, and things seem to be going backwards but we also know we’re going from seven and a half billion people to eleven billion people. That’s someone unavoidable. And if you look at how we’ve performed in terms of biodiversity, half the numbers of plants and animals on the planet have disappeared in the last fifty years.

But a lot of that is due to stupidity, and bad actions, and inefficiencies. Technology is an important player. Wind and solar in Australia now are far more cost effective than coal, there’s enormous battery storage, agricultural technology changes – we did the analysis, and we think we can have our cake and eat it too. We can provide the prosperity to have eleven billion people without stuffing the planet. We need to act, though, VERY fast in the next ten years.

Q: What does that mean to you, that we can have our cake and eat it too?

A: Technology. It’s driving the long term sustainable growth of the planet. Growth in one sense has to end – we can’t just pack more and more people on to the planet, and we can’t just continue to consume. But the other big driver of growth, the 7% GDP that countries aspire to – that’s technology. And technology has shown no sign of slowing down.

Most of the vegetables on the planet [in the future] will be grown hydroponically in massive farms beneath cities, no transport costs, virtually no water use. Power use, yes, but with low cost energy. In some sense it’s what the Dutch are already doing, in greenhouses. You can feed an enormous number of people on this stuff.

You look at the fisheries. The five hundred biggest fisheries of the world have actually turned around. The abundance of them are starting to recover… the boats have better technology, the fish are marked and the supply chains can be monitored and on average with the mathematical and statistical modelling they’re looking up. It’s the nine and a half thousand small scale fisheries on the planet that are lagging.

Q: How do you address climate change deniers?

A: Climate change is a fact. It’s disappointing this issue is still being discussed. But to the [deniers] holding out, let’s pretend… let’s say it’s only 50/50. Imagine there’s a 50% chance that climate change will get away from us and we’ll head towards 4, 5, or 6 degrees Celsius, which really would be pretty nasty for nature and people across the entire planet… the cost of going carbon neutral in a country like Australia is only about one cappuccino, per person, per week. Would you be willing to forgo a cappuccino every week to stop the chance of civilisation as we know it ending, as an insurance policy?

And all the things we’re going to do to reverse climate change have all these extra side benefits to them as well. Better water, food, more access to green space, all the things that make people mentally and physically happier.

Q: So what’s the role of technology in conservation, looking ahead?

A: It’s an exciting time. We actually have all the technology we need to save the planet. Well and truly. It’s just not being deployed fast enough and scaled quickly enough to get where we want.

It’ll get there, but the longer we wait the bigger the price we have to pay.

The launch of the EarthTech Crowdfunding campaign was a great success, with a turnout of over 450 people coming out to support EarthTech and watch the 2040 movie.

The campaign is now in full swing, so make sure to join the tribe to find out the latest!

Thanks to Jandamarra Cadd for the Acknowledgement of Country, Mayor Tony Wellington for a heartfelt message about the environment and our unique community and to the team at Starry Nights for putting on a great show!

Brian Keayes, Co-Founder at EarthTech, said “We are inviting the youth of Australia to take part in an unprecedented challenge this December. Teams will have access to expert educational material and mentorship so they can uncover the best new solutions to our biggest environmental challenges.”

Winning teams will receive significant prizes including an all-expenses-paid trip to the EarthTech Summit at Richard Branson’s Makepeace Island in Noosa in February 2020. There, they will focus on taking their solutions to the world – supported by global experts and serious investors.

EarthTech Co-Founder, Anthony Moorhouse said, “Young people around the world are striking because they are frustrated. EarthTech is mobilising a tribe to urgently save our future. We want to harness their frustration into positive action and support young people to use their talents and develop new ways of thinking. As a dad, I can’t think of a better day to launch our mission than Father’s Day, especially with a screening of 2040 which looks at new thinking on global warming. We need to take action on climate change now, for the sake of our kids and all future human generations. Together, we can overcome the challenges we are facing.”

EarthTech is proud to bring the first free screening of 2040 to the Noosa Region.

2040 is a hybrid feature documentary that looks to the future, but is vitally important NOW!

The 2040 journey began with award-winning director Damon Gameau (That Sugar Film). Motivated by concerns about the planet his 4-year-old daughter would inherit, Damon embarked on a global journey to meet innovators and changemakers in the areas of economics, technology, civil society, agriculture, education and sustainability.

The grass field behind Peregian Digital Hub is a nice open space with plenty of room to spread out to see and hear the movie. A massive screen and beautiful sound system is in place to enjoy the film. Bring your blankets, chairs, drinks, popcorn and enjoy.

This is an all-ages event, so no alcohol or smoking! Bring re-usable bottles, and let’s work together to reduce waste at the event!

EarthTech acknowledges the Australian Aboriginal and Torres Strait Islander peoples of this nation. We acknowledge the traditional custodians of the lands on which our company is located and where we conduct our business. We pay our respects to ancestors and Elders, past and present. EarthTech is committed to honouring Australian Aboriginal and Torres Strait Islander peoples’ unique cultural and spiritual relationships to the land, waters and seas and their rich contribution to society.

The EarthTech brains-trust gathered at the Peregian Digital Hub today to work through the tech stack required to build the EarthTech Challenge. An impressive team of global tech talent has come together around our vision to build out a national challenge.  So great to work with such a talented group of individuals. 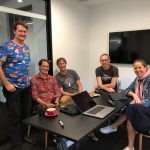 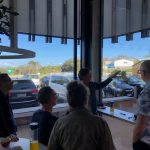 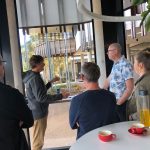